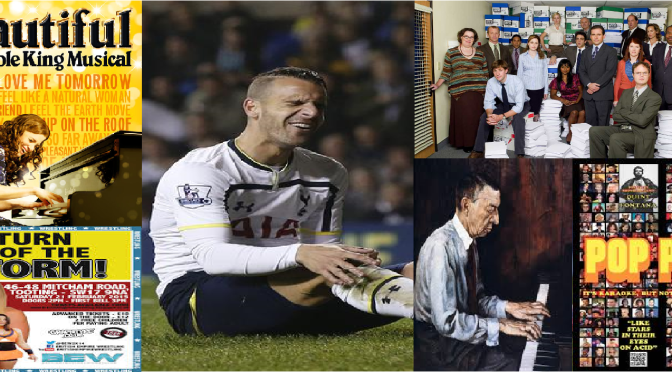 RINGERS AND SINGERS: A CULTURAL REVIEW

I jest of course as all events were culturally rewarding and provided an interesting juxtaposition for my latest blog piece which combines little reviews of some stuff I’ve been gone and done recently.  I have also watched loads of films as well but will deal with those in my February edition of Screenwash.

I’m not a massive fan of musicals per se but as a Valentine gift for my girlfriend (yes – I have a girlfriend now and she’s real) I bought her tickets for this show. Oh, and I went along too. It’s the story of Carole King and her rise from 16 year-old novice songwriter to the heights of fame as a solo artist. Singularly, and with her husband Jerry Goffin, she wrote a litany of hit records including: Up on The Roof, Will You Still Love Me Tomorrow, The Locomotion, Natural Women, I Feel The Earth Move, Pleasant Valley Sunday, You’ve Got a Friend and many, many more.

King is clearly a genius and her album Tapestry would become one of the biggest albums of all time. The musical is a joy and while I wanted a bit more about the relationship breakdown and Goffin’s depression it’s all about the songs really. In Beautiful you get hit after hit after hit brilliantly performed by the young, talented and energetic cast.

This was the first time I’d seen a Wrestling show and it was really entertaining.  I was really impressed by the mixture of physicality alongside loads of variety with male and female comedy characters, villainous wrestlers and proper athletes battering each other round the ring in a series of tremendous bouts.  There was an element of theatricality and pantomime but also genuine pain as there were no holds barred in many contests. It’s pretty cheap too so do check out their events. Next one is at the end of March.

Lounge loser extraordinaire Quint Fontana hosts a karaoke event with a difference as “stars” from the pop world (or are they comedians in disguise) perform before a joyous (i.e. drunk) audience in a King’s X basement.  It’s brilliant fun and Quint is a despicably funny host as he sups on his Tyskie beer, goads the audience and banters with the pop guests which included Ronan Keating, Jason Donovan and Christine Aguilera. To be honest it’s worth going just to see Quint have his nightly nervous breakdown!  Awesome!

RACHMANINOFF: INSIDE OUT –  FESTIVAL HALL

This was almost cultural overload as I tasted my first quaver of a classical musical concert at the Festival Hall.  Performing with grandstanding gusto the London Philharmonic soared with a virtuoso performance of Rachmaninoff’s greatest hits and music which I came to recognise from David Lean and Noel Coward’s story of understated love – Brief Encounter (1946).

With no actual frame of comparative experience I can only say that it was hugely enjoyable evening and one which was not only aurally pleasing but visually interesting too as the orchestra and conductor brought home the stunning compositions with incredible timing. At times I wondered about the musicians and characters performing (could make an interesting comedy or drama)  and felt giddy at the wonder of the music. Although that could have been the heavy cold I had at the time.

During February Spurs had some vital fixtures and after a stunning last-gasp win against North London rivals Arsenal we unravelled slightly where results were concerned. Harry Kane’s brilliant header proved to be our last winner in February as Spurs went out of the Europa League on aggregate to an efficient Fiorentina team in Florence.  We started well but could not break them down.

In between we scraped a 2-2 draw with West Ham after fighting back from 2-0 down. Biggest blow was losing 2-0 to Chelsea in the Capital One Cup at Wembley. Mourinho set his team up solid from the start and while competed until the final whistle, our usual match winners Kane and Eriksen could not get us over the line.  After the highs of crushing Arsenal the bitter lows of defeat hit hard. We have 12 games in March to get into the top four or it’ll be more trips to Cyprus, Kazakhstan and Madagascar in the dreaded Europa League.

I have had to move twice recently due to reasons beyond my control so no longer have Sky Television beaming it’s entertainment juice into my living room and brain. Thus, I have gone back to my favourite online channel www.netflix.com and FINALLY began catching up with the The Office (US version)!  And oh my god it is genuinely one of the funniest and style-diverse situation comedies I’ve seen.

It uses character, songs, slapstick, embarrassment, gags, pranks, horror and pathos to propel it’s narratives as the employees of Dunder Mifflin get themselves into all manners of scrapes and cringeworthy situations.  Some great cameos too (I’m up to Season 6 now) as Amy Ryan, Idris Elba, Kathy Bates and even Christian Slater have popped up in episodes.  Anchored brilliantly by an ensemble cast notably Steve Carell as Michael Scott and my favourite, Rain Wilson as Dwight Schrute, this is comedy performance and writing of the highest order. Just TOO funny.