Based on: One Flew Over the Cuckoo’s Nest by Ken Kesey

“Now calm down. The best thing we can do is go on with our daily routine.” Nurse Ratched

Not all film monsters come from outer space or the mountains of Transylvania or from beyond the grave. In fact, some of the scariest monsters from literature and the silver screen are often humans. A magnificent example of this is Ken Kesey’s controlling matriarch figure from One Flew Over the Cuckoo’s Nest, Nurse Mildred Ratched. Even the name conjures up feelings of evil, manipulation and pain. There has been a recent Netflix origin story with Sarah Paulson in the iconic role, however, today I will concentrate on Louise Fletcher’s mesmerising rendition of authoritarian villainy.

Evil comes in many guises and can be overt, perverted or, in Nurse Ratched’s case, extremely covert. She is the personification of calm on the outside, but clearly raging with poison and anger on the inside. Her obsessive desire for routine and control makes her ideal to be the Head of the Department, however, it is the burning internal joy she appears to take from manipulating and bullying the inmates which makes her an extremely dangerous person. The battle of wills she has with Randall P. McMurphy (Jack Nicholson) powerfully drives the narrative in the film. Nicholson gives an electric performance as the convict faking lunacy. But he is more than matched by the subtle pragmatism in Louise Fletcher’s portrayal. Both deservedly won Academy Awards.

Apparently the role of Nurse Ratched was offered to esteemed actresses such as Anne Bancroft, Angela Lansbury and Geraldine Page, but eventually Milos Forman and his producers offered the role to then unknown, Louise Fletcher. It’s a serendipitous piece of casting as a well-known actress would arguably have provided less surprise within the characterisation. Fletcher herself has commented that she felt Ratched was a virgin. Further going on to say in an interview with Vanity Fair, “She hasn’t married, hadn’t done this, hadn’t done that, and was self-sufficient on her own leading this life, because she dedicated her life, her earlier life, to other people who needed her.” Perhaps this caring for others eventually wore her down and Ratched may suffer from compassion fatigue. Either that or she is genuinely the most insane person in the asylum, while ruling with quiet and ruthless efficiency.

Based on The Ninth Configuration by William Peter Blatty

Sparked by uber-film critic Mark Kermode waxing lyrical about The Ninth Configuration (1980) in one of his cinema books, I was extremely pleased when I found a remastered 2016 reissue streaming on Amazon Prime. I don’t always agree with Kermode’s effusive praise of certain films, however, his opinion should always be respected. Having watched the film I can concur that it is indeed an under-rated classic. Just to clarify, for me, an under-rated classic can be a film I love, plus satisfy the following criteria:

While the writer and director, William Peter Blatty, won a Golden Globe for best screenplay, I feel that The Ninth Configuration (1980) is somewhat of a lost masterpiece. It was released at the same time as Ordinary People (1980) , The Elephant Man (1980) and Raging Bull (1980) and rarely seems to be discussed or praised at all these days. Well, aside from Mark Kermode’s gratefully received validation. Thematically, it is very strong as it deals with mental breakdown and illness amidst soldiers post-Vietnam. Moreover, it also contains memorable iconography within a curiously foreboding setting.

Based on Blatty’s 1978 novel, which in itself was a reworking of an earlier story called, Twinkle, Twinkle “Killer” Kane, The Ninth Configuration centres the action in a grand chateau located, rather weirdly in America somewhere. The dark, shadowy castle (which was actually in Germany), is surrounded by deep forestation and is used by the U.S. government as an insane asylum for military personnel. Spring-boarding themes and ideas from movies such as: One Flew Over The Cuckoo’s Nest (1975), Mash (1970) and, in regards to its exploration of P.T.S.D., The Deer Hunter (1978), the narrative features a whole host of eccentric and over-the-edge characters. They include an Astronaut, Captain Billy Cutshaw (Scott Wilson), who went mad and sabotaged a space launch, Jason Miller as Lieutenant Frankie Reno, a soldier attempting to direct Hamlet with a cast of dogs; and the recently arrived, new psychiatrist, Colonel Vincent Kane (Stacey Keach). It is Kane’s and Cutshaw’s developing relationship which powers many of the philosophical and existential debates within the film’s incredible script.

For a film set in an asylum Blatty unsurpisingly uses dark humour, hysterical personalities and some incredibly funny lines of dialogue to propel an absurd first half. However, as Cutshaw and Kane’s connection grows deeper, the two men push each other into some very dark places. Exploring the slight gap between insanity and sanity is a tricky thing to get right in terms of tone, however, Blatty, is a brilliant writer and succeeds with a script that zig-zags the line between chaos and structure. He also benefits from an amazing ensemble cast of character actors who throw themselves heartily into the chaos on show. Scott Wilson and Stacey Keach are especially memorable in their intense and honest portrayals of soldiers pushed too far by their respective commands.

Overall, The Ninth Configuration (1980) is a forgotten masterpiece which deserves revisiting. I was blown away by the endlessly quotable dialogue and the risks Blatty took as a director. I mean, he opens with an incongruous Country and Western song-backed montage before the credits. This pop video beginning is jarring, but somehow makes sense in the end. Blatty then veers between farcical humour, crazed episodes involving the lunatics taking over the asylum, and philosophical and theological discourse within the therapy sessions. Finally, the film finishes with a violent and cathartic denouement, yet one which, given the dark existentialism that has unfolded, is amazingly full of hope, faith and optimism. 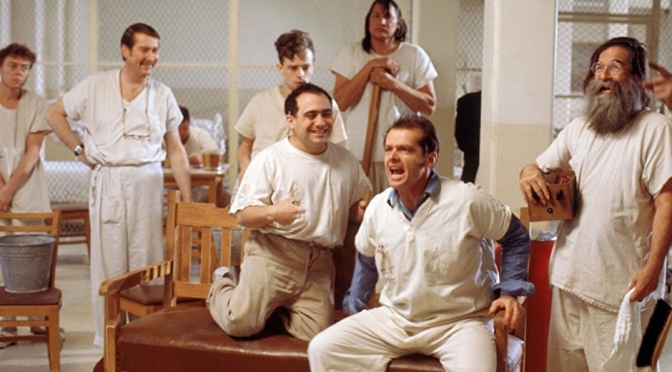 Multi-award winning One Flew Over The Cuckoo’s Nest (1975) is easily one of the most complex, intense and darkly funny cinematic explorations of mental health I have ever seen. It is also one of the best films I have ever seen too. Based on Ken Kesey’s novel, it charts the admission of Randall P. McMurphy (Jack Nicholson) to an Oregon mental institution as he attempts to avoid hard labour at a prison farm.

McMurphy is a charismatic, anti-heroic and anti-establishment criminal, but definitely not crazy in the clinical sense. Rather than lie low and serve his time though, he constantly clashes with the staff, notably Nurse Ratched (Louise Fletcher). His unruly behaviour causes him to excite the other patients of the facility, becoming infectious. Thus, Nurse Ratched acts to quell such rebellion causing further conflict with McMurphy. Jack Nicholson is on absolutely incredible form in this film. He’s wild, funny, excitable, manipulative and very entertaining. On the other hand, Louise Fletcher is cool, calm, but equally devious. She loves to be in control and takes quiet joy in denying the inmates their wants.

When McMurphy “loses” a vote to watch the World Series Baseball of 1963 on television, he’s determined to get his own way. So much so, in this classic scene, he enacts what he thinks is happening in a fake commentary. Nicholson is so realistic and excitable you feel like you’re actually at the game. It’s such a classic scene with the gentle music counterpointing Nicholson’s manic delivery. Moreover, the ensemble inmate’s celebrations, Nurse Ratched’s cold-hearted face and a blank television screen create a powerful set of images. Ultimately, McMurphy is a tragic character as he tries to bend the system, only to eventually break himself by the end.

What’s your view on striving for originality in storytelling and entertainment? It could be argued that there is no such thing and creators are simply moving creative chess pieces around the same board; or playing the same musical notes but in a different order. One perspective is that you prefer a writer or director to be bold and aim for originality; with the potential risk they alienate the audience. Some creators actually don’t care about the audience but many others do, preferring to connect emotionally within the casing of genre conventions. Personally, I prefer to be moved emotionally firstly and if the filmmaker or writer has presented their story in an impressive style then this serves to enhance the enjoyment of the narrative.

Cary Joji Fukunaga is a genre filmmaker who has established himself capable of developing impressive genre works such as: Jane Eyre (2011), True Detective (2014), and the brilliant film Beasts of No Nation (2015). Recently, he has also been involved in bringing It (2017) and The Alienist (2018) to the screen; although he did not serve as final director on such products. His latest directorial offering is an adaptation of a Norwegian comedy drama called Maniac. Over ten hit-and-miss episodes we follow the misadventures of a depressive and unstable Owen (Jonah Hill), and grieving pill-addict Annie (Emma Stone), as they enter a medical trial run by the secretive Neberdine Pharmaceutical organisation.

The trial itself involves taking a series of pills and the participants’ cerebral responses being recorded on a sentient artificially intelligent computer called GRTA. Here, Owen and Annie’s lives and minds become internally entwined as the story enables us to visualise their mental anxieties and re-enact their fears during the trial. Owen’s angst is caused by a family issue involving his brother, while Annie still blames herself for a family tragedy. The bizarre surrealist events are very effectively established, however, over the dizzying spectrum of several genre-crossing episodes we essentially get told the same two stories within the: crime, romance, gangster, fantasy and spy genres.

The performances are interesting. Fukunaga has created a world that exists somewhere in between the real and surreal and the future, past and current times. Because of this there’s a sense he has freed the actors from naturalism and at times created a stylistic distanciation. Conversely, Emma Stone was brilliant as always and she is skilled enough to make the strangeness resonate emotionally. However, I felt Jonah Hill, while giving a fine and committed performance, was miscast. Interestingly, Justin Theroux features in a curious turn as a Doctor on the edge of a nervous breakdown. Theroux is a fascinating actor who I think is sabotaging his career and could be the next George Clooney but continues to choose weirdo roles which serve his career no benefit. But hey what do I know!?  Maybe he’s having a lot of fun.

Ultimately, the postmodern stylings cloaked a pretty conventional love story and once again, with a Netflix show, I felt that ten episodes were stretching the narrative a tad. Fukunaga’s combination of different genres and eccentric characters plus a smattering a bloody violence and techno-humour is always interesting. Moreover, much fun is to be had from the references to One Flew Over The Cuckoo’s Nest (1975), 2001: A Space Odyssey (1968), Lord of the Rings and many more films.  Nowhere near as brilliant as True Detective or Beasts of No Nation, Cary Fukunaga still impresses as a director even if Maniac is arguably style over content. Nonetheless, Fukunaga should still be commended for striving for a semblance of originality and ambition, rather than just go for an big payday on a franchise studio genre film.