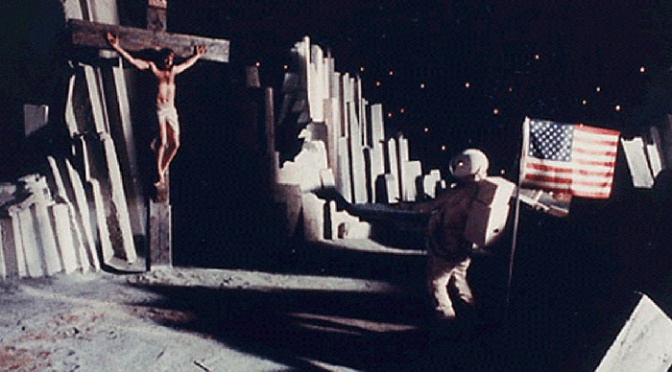 Based on The Ninth Configuration by William Peter Blatty

Sparked by uber-film critic Mark Kermode waxing lyrical about The Ninth Configuration (1980) in one of his cinema books, I was extremely pleased when I found a remastered 2016 reissue streaming on Amazon Prime. I don’t always agree with Kermode’s effusive praise of certain films, however, his opinion should always be respected. Having watched the film I can concur that it is indeed an under-rated classic. Just to clarify, for me, an under-rated classic can be a film I love, plus satisfy the following criteria:

While the writer and director, William Peter Blatty, won a Golden Globe for best screenplay, I feel that The Ninth Configuration (1980) is somewhat of a lost masterpiece. It was released at the same time as Ordinary People (1980) , The Elephant Man (1980) and Raging Bull (1980) and rarely seems to be discussed or praised at all these days. Well, aside from Mark Kermode’s gratefully received validation. Thematically, it is very strong as it deals with mental breakdown and illness amidst soldiers post-Vietnam. Moreover, it also contains memorable iconography within a curiously foreboding setting.

Based on Blatty’s 1978 novel, which in itself was a reworking of an earlier story called, Twinkle, Twinkle “Killer” Kane, The Ninth Configuration centres the action in a grand chateau located, rather weirdly in America somewhere. The dark, shadowy castle (which was actually in Germany), is surrounded by deep forestation and is used by the U.S. government as an insane asylum for military personnel. Spring-boarding themes and ideas from movies such as: One Flew Over The Cuckoo’s Nest (1975), Mash (1970) and, in regards to its exploration of P.T.S.D., The Deer Hunter (1978), the narrative features a whole host of eccentric and over-the-edge characters. They include an Astronaut, Captain Billy Cutshaw (Scott Wilson), who went mad and sabotaged a space launch, Jason Miller as Lieutenant Frankie Reno, a soldier attempting to direct Hamlet with a cast of dogs; and the recently arrived, new psychiatrist, Colonel Vincent Kane (Stacey Keach). It is Kane’s and Cutshaw’s developing relationship which powers many of the philosophical and existential debates within the film’s incredible script.

For a film set in an asylum Blatty unsurpisingly uses dark humour, hysterical personalities and some incredibly funny lines of dialogue to propel an absurd first half. However, as Cutshaw and Kane’s connection grows deeper, the two men push each other into some very dark places. Exploring the slight gap between insanity and sanity is a tricky thing to get right in terms of tone, however, Blatty, is a brilliant writer and succeeds with a script that zig-zags the line between chaos and structure. He also benefits from an amazing ensemble cast of character actors who throw themselves heartily into the chaos on show. Scott Wilson and Stacey Keach are especially memorable in their intense and honest portrayals of soldiers pushed too far by their respective commands.

Overall, The Ninth Configuration (1980) is a forgotten masterpiece which deserves revisiting. I was blown away by the endlessly quotable dialogue and the risks Blatty took as a director. I mean, he opens with an incongruous Country and Western song-backed montage before the credits. This pop video beginning is jarring, but somehow makes sense in the end. Blatty then veers between farcical humour, crazed episodes involving the lunatics taking over the asylum, and philosophical and theological discourse within the therapy sessions. Finally, the film finishes with a violent and cathartic denouement, yet one which, given the dark existentialism that has unfolded, is amazingly full of hope, faith and optimism.

SISYPHEAN REPRESENTATIONS IN CINEMA AND TELEVISION

“Success consists of going from failure to failure without loss of enthusiasm.”  Winston Churchill

Have you ever just thought: what’s the point in carrying on?  Dead French bloke Albert Camus wrote an existential essay called The Myth of Sisyphus which I read when I was in my teens; and while failing to understand it I felt cool and superior to everyone else who hadn’t read it. I read it again a few years ago and it is a fascinating analysis as to whether life has any point.

Camus deemed life an exercise in the absurd and one should never give up but rather laugh or revolt; something like that anyway! He offered mythological character Sisyphus, who, if you didn’t know, was punished for his deceitfulness by the Gods. His penance was to forever push the same boulder up a hill over and over. Camus opined Sisyphus’ struggle gave life meaning despite the immortal repetition.

I have in my darkest hours of life’s disappointment thought about relinquishing hope. However, I agree with Camus as I feel NOT giving up is in fact success enough; and persistence is reward enough whatever the outcome. So, to celebrate characters overcoming adversity, abject failure or seemingly insurmountable odds, I have picked out some “Sisyphean” characters from TV and cinema who just didn’t know when they were beaten even if the odds were stacked against them or they’ve suffered defeat after defeat.

Bond meets Kafka in this unique 1960s spy-thriller-with-a-twist. The brainchild of TV star Patrick McGoohan, this unique and psychedelic show found our anti-hero Number 6 attempting to escape from an idyllic “prison” called the Village. He could just settle back and give in to his captors’ questioning but Number 6 refuses to be filed and indexed; preferring to fight against the authorities despite being thwarted week after week.

Patience is a virtue they say and Andy Dufresne shows it in spades; tiny little digging spades he uses to chip away at a tunnel over many, many years. This prison film benefits from a gem of a Stephen King story, plus Frank Darabont’s brilliant writing. Everyman Dufresne could be battered into submission by the rape, beatings, and incarceration he endures but his stubborn survival instinct pays off in a wonderful pay-off at the story’s end.

Don’t you just hate the darned Zombie Apocalypse!!  I could have chosen a number of characters from other zombie films or shows but to me Carol Peletier (Melissa McBride) is one of the great survivors. She began as an meek character abused by her husband, but having seen her young daughter turn she eventually grew into a formidable “Sarah Connor” archetype kicking zombie butt with aplomb. Arguably, her mental breakdown in the last season was a disappointing but no doubt the Carol we love will be back; hopefully.

Bear with me on this one!  DiCaprio got the Oscar for his nature-versus-man-survival-fest and deservedly so for his physical endeavour. His character Glass just refuses to shatter as he firstly suffers a vicious Grizzly attack and then is left for dead by Tom Hardy’s mumbling mercenary. After which the terrain, natives, climate, and most terrifyingly, men, conspire to force Glass into all manner of gruelling trials as he seeks revenge for the murder of his son.

I loved this John Wayne classic pursuit Western when I was a kid and have seen it too many times to mention. The Duke won the Oscar yet the standout performance was from Kim Darby as Mattie Ross; a feisty, motor-mouth irritant who nags and cajoles and chases and fights after vicious murderer Tom Chaney. My favourite scene is with Rooster Cogburn, who when finally realising she just won’t give up, laughs and proclaims in his classic laconic drawl, “By god – she reminds me of me!”

Mad Max is one of the great existential action heroes. Adorned in battered leather and wearing life’s scars on his face and heart he continues to live and survive in a hopeless world full of punk maniacs with death in their eyes. I guess he carries on because there’s a flicker of hope in his marrow; even if danger and pain are often his only companions on the Fury Road!

I could never begin to understand the suffering individuals went through at the hands of slavers. Yet Solomon Northrup’s memoir and latterly Steve McQueen’s film version of the story encapsulated the pain of such an existence with such power. Chiwetel Ejiofor excels in the lead of an innocent man stolen from his family and forced into bondage by nefarious examples of humanity. Throughout, Northrup retains his dignity and strength never to surrender; and is ultimately rewarded with freedom despite a horrific twelve years of agony.

Scrat is a big-toothed-long-suffering-squirrel from the Ice Age franchise whose comic vignettes involve him attempting to transport a huge acorn to an unknown hibernation location. Following Murphy’s Law adage that “what can go wrong will go wrong” to ad infinitum the pain and mayhem for the prehistoric squirrel makes for hilarious slapstick. While we revel in Scrat’s misadventures the blighter never gives up on his prize suffering blow after blow yet never relinquishing that nut whatever the weather.

Benefitting from an effervescent performance by young actress Eden Sher, the character of Sue Heck is a socially awkward yet committed individual. She tries out for EVERYTHING: spelling bees, cheerleaders, competitions, after-school clubs and pretty much FAILS every time. However, she views eschews failure and rejection and the fact teachers don’t even remember who she is as a mere trifle.  She is a terrific loser whose enthusiasm knows no limits and for that I salute her spirit and passion. We can all learn from Sue Heck!

Chuck Jones and Michael Maltese original animated tortured soul IS Sisyphus incarnate. Doomed to pursuit and abject failure Wile E. Coyote just absolutely won’t give up chasing the Roadrunner. Slapstick violence and near-death pummels the damned creature’s soul; yet he comes back for more and more punishment without ever seeking an alternative food supply. I found the cartoons hilarious as a kid and still do now. Wile E. Coyote is the “living” epitome of Churchill’s quote which begins this piece and I love the character for his sheer bloody-minded stubbornness and refusal to yield.