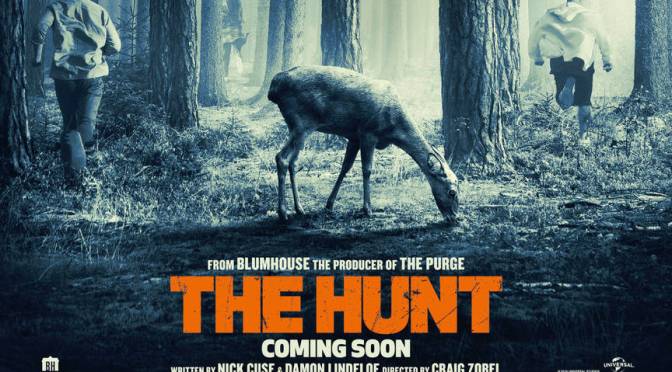 RKO’s movie, The Most Dangerous Game (1932), based on a short story by Richard Connell, is a genuine B-movie delight with a great villain named, Count Zaroff, plus solid lead performances from Joel McCrea and Fay Wray. The simple, but ingenious story involves the Count hunting shipwrecked humans on his remote island. This thrilling premise has been adapted numerous times over the years and the latest one, produced by Blumhouse Productions, is called The Hunt (2020). Arguably, the best version of this story is the Japanese classic, Battle Royale (2000), where high school kids are charged with killing each other to win a prize: their life!

Craig Zobel directs The Hunt (2020) from a screenplay by Damon Lindelhof and Nick Cuse. While The Most Dangerous Game (1932) had big-game hunting and murder-as-sport as a theme, and Battle Royale (2000) was essentially about the control of juvenile delinquents, The Hunt (2020) instils the mayhem, traps and violent deaths with a lean toward political commentary. Reflecting the division of Trump’s Presidency and the left/right and North/South divide allows the witty script to deliver gags damning both sides of the political strata. All from rich capitalists to the liberal elite and right-wing conspiracy theorists are satirised mercilessly. Having said that, none of this gets in the way of the breathless pace of shootings, explosions, stabbings and bloodletting.

Overall, what The Hunt (2020) lacks in characterisation and plot credibility, it more than makes up with several tense and funny scenes. You’re never too far away from a gory end or biting punchline or the surprise death of a relatively well known actor. The cast and director do not take this movie particularly seriously, but I must say Betty Gilpin as Crystal Creasey was brilliant. Energetic Gilpin takes a thinly written character and provides much personality, as well as an impressive physical presence in the many well-choreographed fight scenes. Ultimately, The Hunt (2020) will excite those who want something undemanding for their Saturday night movie entertainment. I particularly enjoyed several of the cartoon kills in this comedic action thriller. I could take or leave the social commentary, because for me politics is the most dangerous game of all.