DIRECTOR: Kenneth Lonergan (You Can Count on Me (2000)

STORY: A distant and emotionally disconnected man must face family and friends following the death of his brother. 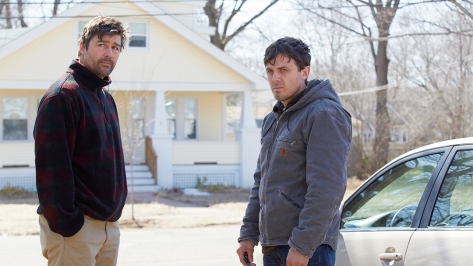 Kenneth Lonergan, Casey Affleck and Michelle Williams should take a very long bow for their writing, directing and acting work in this moving and emotional, yet at the same time, humorous character drama.

Casey Affleck plays a seemingly unassuming handyman who buries anger and despair deep within his heart. Initially, he seems passive, yet during his interactions with one of his customers and during a bar brawl he reveals a volcanic tension simmering under the surface of his psyche. When his older brother passes away he returns to Manchester-by-the-Sea in Massachusetts and is forced to confront past tragedies plus take care of his brothers’ estate and teenage nephew.

This is one of those films which moves at its’ own pace and in scenes of quiet drama, sporadic violence and subtle flashbacks, Lonergan builds a truly formidable narrative and character study. Moreover, Affleck portrays a lost soul with such exquisite pathos you could feel his characters’ pain jump out from the screen. His scenes with Michelle Williams genuinely made me want to cry because they were so sad.

Ultimately, this is Affleck’s film as he haunts the screen with a truly award-winning performance. As well as the dark drama there are many witty lines and scenes too in what is one of the best films I have seen in 2016. If you prefer your films as real and raw as possible and are happy to experience a few hours without explosions or special effects, then watch this everyday story of humans trying to cope with their past, present and future existence.