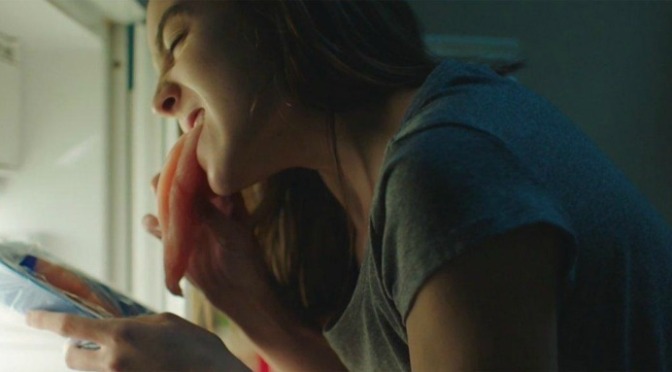 REVIEW: Often you watch films and think it’s not a great movie but such is the intriguing premise or themes, it could make a fascinating essay. With Raw, however, it’s both a bloody good coming-of-age-gory-horror-story and has a number of thematically powerful messages that makes you think too. Indeed, in this film meat is definitely murder.

It begins with innocent-goody-two-shoes-veggie-star-student entering her first week at Veterinary college. With it being the first week she is subject to the more experienced student practical jokes and initiation ceremonies; all amidst hedonistic sex and drug parties reminiscent of something from the fall of the Roman Empire.

Not surprisingly this is a very sexual, animalistic and instinctive film dealing as it does with beasts both human, canine and equine. The lead actress Marillier is a prominent force throughout as her journey follows a carnal, chemical and gory path. Ducorneau, the director, gets a great performance from this young talent as her character transforms from angel to devil without the loss of audience empathy.

This is both an entertaining contemporary horror film and a very intelligent one. It works on so many different levels with themes covered including: veganism, peer pressure, initiation, fitting in, animal cruelty, sexuality. lesbianism, homosexuality, animalism, sisterhood, hedonism, nature versus nurture, cannibalism, family etc.  It crosses genres effortlessly and has one of the greatest and disgusting scenes I have had the pleasure to see for some time.