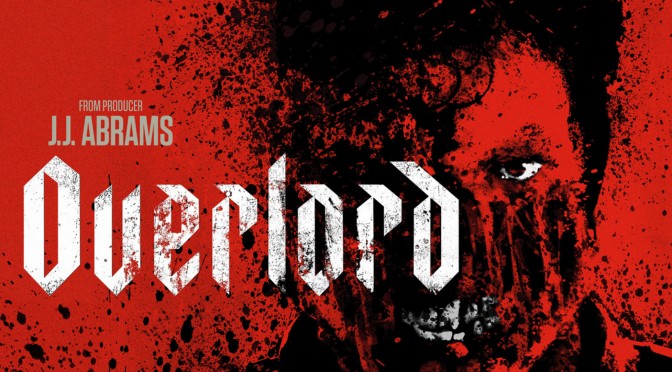 I love a good B-movie horror film and I love a good B-movie war film! So, I’m still confused as to why I missed this one at the cinema first time round. It was released in November 2018 in the UK, so perhaps I was still in London Film Festival mode? Perhaps it fell through the cracks after a busy October cinema-going? Perhaps the marketing wasn’t strong enough over here? Perhaps, perhaps, perhaps?

Anyway, I caught up with it on Sky Cinema via the television box and I immediately regretted not seeing it on the big screen. The film is set in June 1944 during the Allied invasion of Normandy. The operation was called Overlord and part of the WWII D-Day push to defeat the dastardly Nazis. It opens superbly, in mid-flight, as a fighter bomber carries American soldiers about to parachute into enemy territory. Safe to say aeroplane food, crying children and lack of leg room are the least of their worries.

The explosive, noisy and destructive opening sequence sets an incredible pace. Also, the body count starts to stack up too as we land in occupied France. Not so much a dirty dozen as a filthy four remain after the landing carnage. The ragtag quartet consisting of nervous rookie, Private Boyce (Jovan Adepo), tough-guy Corporal Ford (Wyatt Russell), mouthy Private Tibbet (John Magaro), and war photographer Private Chase (Iain De Caestecker), are joined by French civilian fighter, Chloe (Mathilde Ollivier) in battling the Nazi hordes. Their mission is to take out a Nazi radio tower, but we get a whole lot more than the usual WWII battle sequences. Something horrific is lurking in the church where the radio tower is.

While the film essentially deals in genre archetypes the narrative pace, action and suspense really get the heart racing. Moreover, the cast commit to the action and bloodshed with impressive abandon. What I liked was, with relatively unknown actors cast, it meant there was suspense in who would or wouldn’t survive. So, in a film full of surprises this added another layer of tension you wouldn’t get in a star-driven film. Nonetheless, the real asset of the film is the monstrous soldiers born out of the sinister minds of the Nazi Doctors. These are some real nasty pieces of work! Indeed, director Julius Avery revels in representing the bloody carnage these experimental creatures bring. You can’t beat a good old Nazi monster baddie! Well, you can! In all sorts of fleshy, fiery and visceral ways!

I recognised Wyatt Russell from other films and TV shows, and he was great. Russell exuded all the tough qualities his father Kurt has shown down the years, but he gave Corporal Ford a steely edge all of his own. Jovan Adepo and John Magaro impressed as chalk and cheese soldiers, initially clashing but subsequent gaining respect for each other. Adepo’s Private Boyce grows from frightened rabbit to resilient hero over the course of the film. Meanwhile, Game of Thrones scenery-chewer, Pilou Asbæk, begins with quite a subtle portrayal of SS Captain Wafner. Yet, by the end he is on gloriously over-the-top form as the most mutated of all the Nazis.

Ultimately, this is a mid-budget B-movie genre gem. It has lashings of action, blood and gore. It also combined war and horror genres really impressively. I would have liked even more gore and a bit more backstory regarding the Nazi experiments, but that would have probably ruined the surprises. Also, it’s definitely not one of the most original films you will see as there are major echoes of many soldiers-on-a-mission war films, the video-game Wolfenstein and also From Dusk Til Dawn (1995) too. But, with Wyatt Russell, Mathilde Ollivier and Jovan Adepo impressing in the cast and Avery directing the hell out of the explosive action and bloody fighting, I had a great time watching Overlord (2018). It’s just a damn shame I missed it on the big screen when first released.