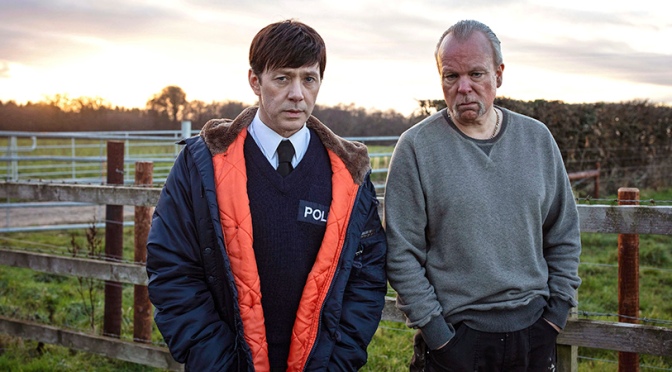 I have written exhaustively about how brilliant this television programme is, so much so I don’t think I can add any further other than I believe it deserves regaling as TV national treasure. Just when you think Reece Shearsmith and Steve Pemberton could be running out of creative steam they prove you wrong with another superb series of Inside No. 9. If you are interested, here are prior articles I have written about it.

1) NINE REASONS WHY INSIDE NO. 9 IS ONE OF THE BEST TV SHOWS EVER! | The Cinema Fix presents:

However, to recap, if you have never seen Inside No. 9 I urge you to do so. It is an exceptional anthology series with six stand-alone episodes per series. Individual episodes feature a whole host of different characters and amazing actors each time led by the multi-talented Pemberton and Shearsmith. As per the prior seasons, the latest one is absolutely unforgettable. It again privileges tightly woven thirty-minute short narratives, which more often than not, feature a twist in the tale. Moreover, the events usually unfold in one location with rarely more than a handful of characters. This makes the narratives feel more focussed, intense and intimate. In series 6, there is even more growth within the anthology genre and much risk-taking where style and form are concerned.

So, here are my mini-reviews of each episode from Season 6 with marks out of nine (obviously).

Not only are Pemberton and Shearsmith accomplished actors, writers and directors, they are also acutely aware how fans revel in their incredible work, devilishly mocking their own mythology and playing with audience expectations. They do this to dizzying impact in the puntastic opening episode, Wuthering Heist. Marrying elements from farce, crime, Commedia dell’arte and the plot of Reservoir Dogs (1992), the players wear masks, prat about and bleed over each other while attempting to pull off a diamond heist. Set in one location, a disused warehouse, Gemma Whelan is superb as the fourth-wall breaking narrator attempting to hold all the story innards together. Pretty soon though one realises that the flurry of puns, sight gags, plot contrivances and comical misunderstandings are intended as wondrous and silly fun. The lack of emotional depth is the joke here and the writers know this. Because Shearsmith and Pemberton’s script has a gag every four seconds, be it a sight jape or involve some sparky verbal dexterity. Lastly, not only do they know they are jumping the shark, but they revel in doing so during this hilarious meta-work.

Among many of the recurring pleasures of watching Inside No. 9 is wondering what the number nine will refer to. It’s been a myriad of things including: a karaoke booth, a hotel room, a train sleeper car, a dressing room, a referee’s changing room, and even a shoe. In Simon Says it’s the name of a television epic called The Ninth Circle. This show is very similar to Game of Thrones in genre and scale, and likewise has a battalion of fans across the country who feel the final series undid the majesty of the prior seasons. The episode opens with immediate mystery as Steve Pemberton’s writer, Spencer, enters his flat with blood staining his clothes and conscience. Suddenly, Simon (Reece Shearsmith), is at the door saying he has evidence Spencer has committed a serious crime. Simon, a Ninth Circle uber-fan then blackmails Spencer into, among others things, rewriting the whole of the last season of The Ninth Circle into something more fan-friendly. Managing to be both funny and suspenseful in equal measures, Pemberton and Shearsmith’s characters play cat-and-mouse expertly, throwing in several big plot twists at the end of this compelling tale.

I watch some television series and films and am often struck at how much time is wasted in setting up the protagonists and story. Similarly, in unnecessarily long TV series you get either eight or ten episodes full of padding in the middle which destabilizes the momentum of the story. Nothing of the sort occurs in Inside No. 9. Stories are set-up with stylish economy and the situations immediately grab you by the throat and rarely let go. In Lip Service, Steve Pemberton’s downtrodden Felix is holed up in a hotel room waiting to liaise with a woman. But it’s not what you think. Sian Clifford’s Iris arrives and it turns out she is there to offer her services as a lip-reader. Felix suspects the woman he loves is having an affair and he requires Iris to read her and a possible lover’s lips at an adjacent hotel suite. I’ve now seen this episode three times and it truly is breathtaking. There’s empathy for Felix’s lost soul, some fine linguistic comedy, a potential romance, Clifford’s performance knocking it out of the park, Reece Shearsmith having great fun as an officious German hotel manager and THAT ending. The denouement, while totally believable, comes out of nowhere and leaves you genuinely speechless.

EPISODE 4: HURRY UP AND WAIT

Quite possibly my favourite episode of the series, Hurry Up and Wait manages to achieve that difficult juxtaposition of being meta-textual and containing some real emotional power. Because it is one thing to be self-referential and satirise the creative process, in this case the making of a television police drama starring famous actor Adrian Dunbar, but it’s quite another to build in a murder mystery and empathetic characters who you root for. While Reece Shearsmith is always excellent playing angry characters, here he portrays James, a mild-mannered actor, who has got a break playing a scene with the precious talent, Dunbar. The TV drama they are in concerns a missing child and the “green room” happens to be a static caravan owned by a working-class family who may have important information about said grisly crime. Steve Pemberton and Pauline McGlynn play the parents of immature, Beverley – the brilliant Donna Preston – adding much comic relief, but all possibly hiding a dark secret. As James learns his lines he also plays detective seemingly discovering the truth until the truly chilling ending is revealed.

EPISODE 5: HOW DO YOU PLEAD?

Arguably the darkest tale, both in terms of the noir lighting and foreboding themes, it is difficult to discuss this tale of soul-searching guilt and justice without giving away too much of the story. Thus, I’ll talk about the actors and characters more. Derek Jacobi gives a deeply moving performance of a dying barrister who prides himself of, after an upturn in his early legal career, never losing a case in court until retirement. As he lies dying in bed, lungs heavy around his heart, he feels guilt about one case where he defended the indefensible. As he confesses his regret to Shearsmith’s cheery carer, it is soon revealed both men have sins they buried in the past which will soon come back to bite them. Watching these two fine actors spark off one another is as compelling as television drama can get, but there’s also comedy there too as Shearsmith delivers some spirited one-liners in between Jacobi’s grand screen gravitas. But where’s Pemberton I hear you ask? He’s sitting there waiting patiently in the shadows of this evocatively lit and thrilling tale.

EPISODE 6: LAST NIGHT OF THE PROMS!

Are you aware of the work of Dennis Potter? He was one of the finest writers in British television from the 1960’s way into the early 1990’s. His scripts were always highly erotic, political and incredibly controversial. They skewered very British and human themes and burnt great sacred cows of the church, government, family, sex and marriage on the TV barbecue, leaving charcoal remains in their stead. Potter was a genius and with Last Night of the Proms, Pemberton and Shearsmith match him for bravado in deconstructing human nature and what it means to be British. Set in a well-to-do, middle-class household, a family of three generations sit down to watch the Last of the Proms on the BBC. It’s a big traditional classical music event and cultural celebration of what it means to be British. It makes me sick! Britain isn’t great. The British are racist, imperialistic and hardy murderers, who have a history and present (fucking Brexit!) they should be ashamed of. The thought-provoking screenplay here is heavy on compelling themes, memorable imagery and striking symbolism. This is a jarring and messy episode and what it lacks in precise plotting it more than makes up for in juxtaposing horror, satire, drama, surrealism, Jesus, social commentary and comedy to rather mesmerising effect. Potter’s ghost would have watched with glee and disgust and hate and love and pity and sadness; which is much how I felt witnessing Last Night of the Proms.