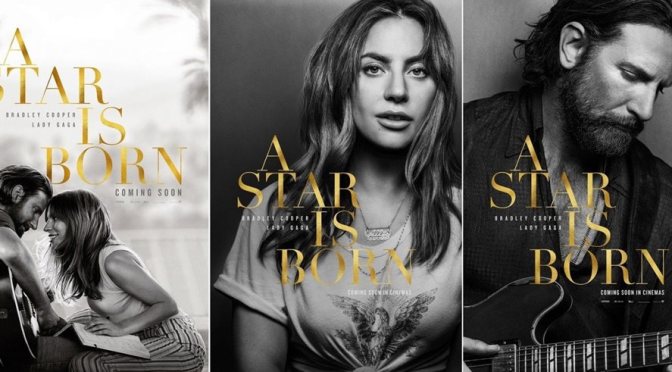 Based on: A Star Is Born by William A. Wellman, Robert Carson, Dorothy Parker, Alan Campbell

When a star is born others will die. Some will fade. Some will collapse. Some will burn bright like the sun before vanishing. That is the cycle of life and the narrative of this standard film classic. Yet, if you’re going to cover an old traditional then you’ve got to be confident you’re going to do it justice. It could be considered an easy track to lay down by replicating a story done three times before, however, if you get it wrong and play a bum note then you’ve ruined the song. Safe to say that writer, director and star Bradley Cooper has thrown his heart and soul into this story and with on-screen partner Lady Gaga, and an incredible production team, they’ve collectively knocked it out of the park. For this review I’d like to play a bit of Oscar bingo and consider the merits of the film along with the players award chances.

This is a film about dreams: living, broken and dying dreams. It’s a beautifully timeless tale of two people who fall in love but their trajectories veer in opposite directions. Bradley Cooper is Jackson Maine: a successful rock star still selling out stadiums and seemingly with everything positive on the outside. Inside though he’s crumbling; he suffers from tinnitus, alcoholism and the inner demons of a broken family past that drugs, booze, music and his long-suffering brother, portrayed by the excellent Sam Elliott, cannot block out. When a chance meeting with a bar singer occurs, sparks fly with Ally, as she suddenly brings a burst of light and hope into his life. While she is insecure off-stage she nails it on-stage; not surprising as she is portrayed by pop mega-star Lady Gaga. The two fall in love but the path of romance, while powerful on and off stage for a while, ultimately struggles with both his addiction and Ally’s subsequent pop success. Given the familiarity of the story the ‘Best Film’ chances could be slightly hampered in regard to originality. But overall it has the feel of both an epic and powerful love story combined with some tragically intimate moments that will make it one of the front runners when the nominations come out.

BEST DIRECTOR CHANCES: 7 out of 10

While this is his is directorial debut, Bradley Cooper has infused the story with an energy, immediacy and intimacy akin to that of a veteran filmmaker. The on-stage scenes put you at the heart of the gigs, while his sterling performance and that of Lady Gaga’s absolutely soar. There is a core reliability of emotion in so many memorable scenes, from the humour of Ally’s father and his chauffeur circle of friends, to the happy times of Ally and Jackson in love, and the more tempestuous boozy periods. Cooper’s helming is consistent and it is clearly a labour of love as he successfully melds romance, tragedy and backstage musical in an impressively directed story.

Lady Gaga is a ridiculous name but it’s hard to forget. While not a massive fan of her pop persona she has released a plethora of songs catchier that the bubonic plague. I had only seen her acting before in a couple of things, notably American Horror Story: Hotel, but due to the hysterical style of that gruesome anthology it’s difficult to tell if she had much range. However, as the working class Ally, she infuses the character with a bright-eyed innocence and fiery passion that wins you over immediately. Her and Cooper’s chemistry is tremendous and very believable and those eyes; they just made me melt at times. Oh, and of course THAT voice. What a voice and what amazing interpretations of so many great songs. Lady Gaga will go very close to the Best Actress Oscar in my mind.

Cooper directs himself very well and his quietly impactful performance both on and off stage really got me in the heart. The pathos and emotion he conveys in charting the collapse of a man crumbling from the inside out is very powerful. Cooper reminded me of a younger Jeff Bridges and indeed, Sam Elliott with his performance encapsulating a talented and pained artist who is never happier than when on stage. Off stage the demons are still there haunting him emotionally and physically. Being harsh, one could say the familiarity of the character – a grizzled alcoholic musician battling addiction – could go against his Oscar chances, but Cooper’s performance remains one of nuance and empathy.

BEST SUPPORTING ACTOR: 8 out of 10

There are a couple of serious contenders here with Andrew Dice Clay giving a sly comedic turn as Ally’s protective father. Moreover, there’s the battle-born gravitas of Sam Elliott as Jackson’s long suffering road manager and brother. The scene where he puts his drunken brother to bed in order to stops him choking on his own vomit, protecting yet also reviled by this broken man, impacts greatly. Elliott just nails his role and the film could have benefitted even more from his presence throughout. Nonetheless, he steals those scenes he does inhabit and will certainly get nominated.

Shallow will win the Best Oscar no doubt. When introduced acapella by Lady Gaga you only get a suggestion of its’ power. However, when she launches into it on stage it is an absolutely memorable and stand-out musical moment. The music throughout is linked powerfully to the emotion of the characters from Jason Isbell’s composition Maybe It’s Time to the final heartfelt song, I’ll Never Love Again, sang beautifully by Lady Gaga. Even the sly satirical digs at the soulless pop that Ally sings are done with skill. The juxtaposition of their plasticity versus the realness of the rock music delivered by Ally and Jackson creates another layer of musical depth in a consistently brilliant soundtrack.

A Star Is Born (2018) is a great cinematic experience with every person involved in the production at the top of their game. The story is familiar but the performances, characterisation, direction and the songs all combine to create a very emotional and human journey. I’m not the greatest fan of musicals but this one had me hooked from start to finish and is a fine example of classic Hollywood genre storytelling at its best.