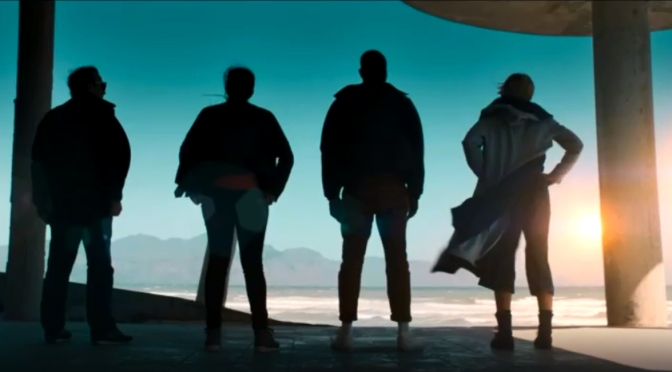 Continuing my weekly review of the new Doctor Who season we found our heroes and heroines rather worryingly floating in space at the end of the last episode, The Woman Who Fell to Earth. Such concern and drama was quickly dispensed with immediately as the Doctor and companions soon found themselves out of the frying pan and into the fiery threat of a space-ship crashing on a seemingly deserted wasteland planet called Desolation. We also got a first look at the opening credit sequence with full blast of the updated, yet very retro feeling, theme tune. Both were, like the first episode of this new season, very familiar yet quite alluring.

The opening action set-piece of The Ghost Monument was pretty suspenseful as a space shuttle hurtled to the planet surface rather dangerously. It also introduced us to two working class space travellers called Angstrom and Epso, portrayed by quality character actors Shaun Dooley and Susan Lynch. They were final two contestants competing for the grand prize in an Intergalactic Space race run by dodgy bookie/gangster/oligarch, Illin (Art Malik). Unsurprisingly the Doctor, and crew, got caught up in the frantic chase to the ‘Ghost Monument’ finishing line.

Like the previous week the episode was dominated by strong visuals, decent effects and a breakneck pace which, while being slightly thin on emotional depth, was extremely fun. The South African vistas, representing Desolation, were absolutely stunning and gave the episode a very cinematic feel. Essentially a road-chase movie narrative we found the characters on space-ships, boats and doing lots and lots of running about. The race itself added a bonus sub-plot of suspense but the main dramatic question remained: was the Doctor going to find the Tardis?  Well, what do you think?

Overall, I really enjoyed this episode. Like last week Chris Chibnall is still finding his feet with the characters and the Doctor’s persona too. My gut feeling is there’s one too many companions needed but Bradley Walsh, Tosin Cole and Mandip Gill remain very watchable. Moreover, Whittaker’s performance is excellent as she is so talented and energetic. But there were times when her Doctor seemed too uncertain; for me the Doctor is always decisive, even when under pressure. Generic Soldier-Bots aside, the new villains ‘The Remnants’ were quite chilling and I hope they come back. As our space explorers battled them they dropped in a little sub-plot thread that could develop further over this promising start to the season. Indeed, who is the Timeless Child: just another enigmatic narrative Macguffin or something deep and meaningful? Only time will tell.