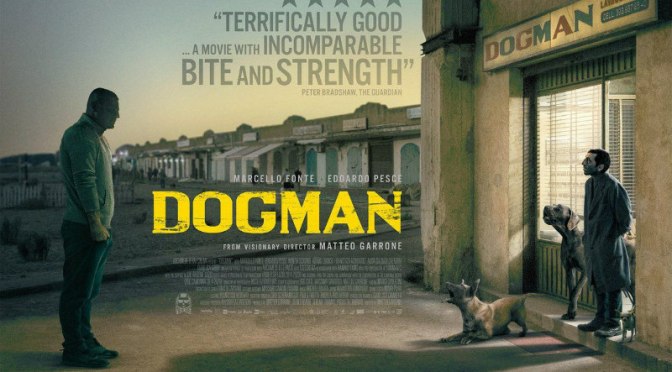 If you were the Italian Tourist Board you would certainly NOT direct potential visitors to view Matteo Garrone’s films about contemporary Italian life. His brutal depiction of Neapolitan gangsters in Gomorrah (2008) was violent and unforgiving. Similarly, his grim snap-shot of Roman contemporary life, in Dogman (2018), is again a hopeless, violent and nihilistic experience.  While there are glimmers of kindness and some possibility of escape, Dogman offers its characters little more than gut-wrenching pain and emptiness. It’s genuinely high quality filmmaking but up there with, Lean of Pete (2018), as one of the most depressing films I have seen all year.

Dogman starts in positive enough fashion with Marcello Forte as an Italian everyman making a living as a dog sitter, walker and groomer. His interaction with the animals he looks after is both humorous and touching. In order to make ends meet though and provide for the young daughter he worships, Marcello deals small quantities of cocaine. This inevitably opens the door for possible trouble. Forte is incredibly well cast. He has a kind but haunting face. It is dominated by big eyes, a crooked smile and wonky teeth. He loves his job, his animals, his friends and family. Like a dog in character, he tries so hard to be loyal and liked but every one of his decisions seems to lead to tragedy. His loyalty to the local thug, Simoncino is illogical and the main cause of Marcello’s downfall.

Now, I enjoy a decent villain. Often the villain in a movie can be thrilling to watch and sometimes the best aspect of a movie. But Edoardo Pesce’s nemesis Simoncino is the epitome of evil; he is TOO real. He is a drug-addled-ex-boxer-bruiser who has absolutely no sense of loyalty or honour. He terrorises the local businesses and bullies Marcello mercilessly. Marcello tries his hardest to keep his head above water but the likes of Simoncino and his continued poor choices combine to drown his soul. The scariest thing is that Simoncino feels real in his animalistic tendenicies. He is genuinely frightening like some rabid beast, unleashed and out of control.

Overall, this film made me feel really sad. Marcello looks like a clown without the make-up and his pained expression plagues the film especially in the latter stages of the drama. You just want Marcello to get some luck but life just won’t cut him a break. This is a haunting character study of the outsider; a man who is literally like a dog himself. He is faithful, loyal and eager to please but ultimately let down by the human cruelty of those who bully and exploit him.