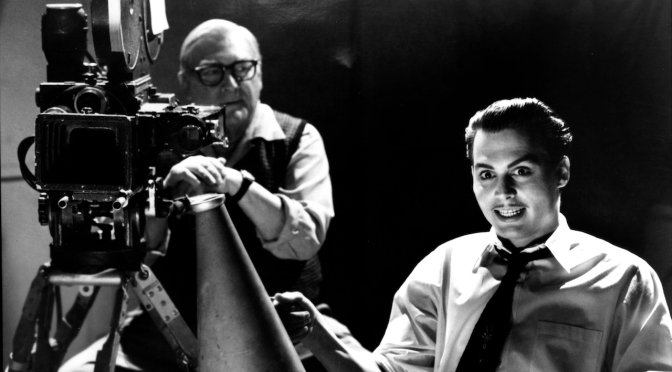 SIX OF THE BEST #23 – FILMS ABOUT FILMMAKING

It’s no surprise there are an abundance of films about the actual process of filmmaking. Firstly, if you follow the idea of “writing what you know” literally, a filmmaker, screenwriter or director will certainly have first hand experience of this. Secondly, and most importantly, is that the film industry is full of rich possibilities in terms of drama, action, tragedy, romance and comedy. Lastly, cinema down the years is replete with imaginative, tough, evil, spoilt, egotistical, eccentric and frankly insane individuals working in the film industry.

“Wait a minute. You come into my house, my party, to tell me about the future? That the future is tape, videotape, and not film? That it’s amateurs and not professionals? I’m a filmmaker, which is why I will never make a movie on tape.” Jack Horner

“Really? Worst film you ever saw. Well, my next one will be better. Hello. Hello.” Ed Wood

“I was just thinking what an interesting concept it is to eliminate the writer from the artistic process. If we could just get rid of these actors and directors, maybe we’ve got something here.” Griffin Mill

“Why bother to shoot this film? Why not release the old one under a new title? You’ve seen one, you’ve seen them all.” Cosmo Brown

“First, take a big step back… and literally, FUCK YOUR OWN FACE! I don’t know what kind of pan-pacific bullshit power play you’re trying to pull here, but Asia Jack is my territory. So whatever you’re thinking, you’d better think again!” Les Grossman

Following my tribute to Ryan Gosling a while ago the second in my little paeans to cinematic people I admire is the wonderful Julianne Moore.  Here I pick out seven memorable performances which make me fall in love with her over and over again.

Moore is a versatile actor who, along with appearing in some cinematic classics,  has been in some right old tosh over the years. However, SHE is ALWAYS great in EVERYTHING!  She can do vulnerable. She can do funny.  She can do romance. She can do sexy.  She can do sweet. She can do evil.  And boy can she do neurosis!  My earliest memory of her was from Robert Altman’s fractured ensemble classic Short Cuts where she spends a lot of time naked from the waist down.  It certainly took er… balls for Moore to take on such a role and she is a stand-out as an artist on the edge of a nervous breakdown.

Much has been made of Jeff Bridges wonderfully comic and laconic i.e. stoned-off-his-nut performance in the Coen Brothers’ much-adored cult classic The Big Lebowski, but the many idiosyncratic supporting characters deserve praise too.  The film is a delightful patchwork of eccentricity and none more so than Moore’s Maud Lebowski – a privileged, upper class artist who seduces The Dude in a strange side-story to already hyper-convoluted kidnapping-gone-wrong-right plot.  The Coens’ satirise rich artistic types via Maud as she too as uses The Dude to her own ends.  Moore dominates the screen with her witty portrayal and even ends up in one of The Dude’s hallucinogenic dreams as a Viking goddess of some sort.

Paul Thomas Anderson’s does Altman’s Short Cuts  up to eleven with a modern mosaic of human dysfunction, loneliness and tragedy.  It’s a difficult but compelling watch as Anderson removes the humour palette, so richly used in Boogie Nights,  to present a cross-section of characters each struggling with existential and familial estrangement.  Moore role is a risky one inasmuch as she is a self-confessed adulterer who married for money and only now — with her elderly husband (Jason Robards) about to die — does she feel any kind of remorse.  It’s a complex character who you feel little sympathy for — even when she attempts suicide — but as car-crash humanity and drama go it’s difficult not to be drawn in by her incredible performance.

An amazing feat of literature from Graham Greene is adapted into a heart-cracking film by Neil Jordan; full of eroticism, stellar cast, lingering looks, exquisite photography and elegant Michael Nyman score.  I watch a lot of films and am not often moved emotionally but the doomed love affair between Moore and Ralph Fiennes really gets my tear ducts on the go.  Love is very difficult thing to get right on the silver screen but the intensity of the acting really is a thing of beauty.  There’s been some amazing love stories set during wartime down the years but this has to be one of the most memorable. Moore was deservedly nominated for an Oscar but lost out to Hilary Swank.

Todd Haynes pristine Sirkian melodrama is a honourable pastiche of 1950s films in both form, setting and content.  It sees Moore wearing the skin of Cathy, a neglected American rose, who ventures into a forbidden love affair with local gardener Raymond Deagen, (Dennis Haysbert).  Once again, Moore is drawn to a character who is pushed to the outside of society, her character becoming a victim of gossip and recrimination within a closely knit bigoted community. American small-town attitudes to race and sexuality are critiqued with director Todd Haynes beautifully designed colour palette and cinematography contrasting the dark subtext at work. Moore was rightly nominated for another Oscar but lost out to Nicole Kidman’s prosthetic nose.

This was a laidback, fun kind of movie which found Julianne Moore in a relationship with Annette Bening’s obstetrician.  It’s a lower-budget independent gem with a fine cast including: Mark Ruffalo, Mia Wasikowska and Josh Hutcherson.  The story finds Moore and Bening’s sperm donee children searching for their father (Ruffalo) and the ensuing first world drama and “chaos” this brings.  Moore’s budding landscape gardener plays a relatively sane character as she argues with the children and the more dominant Bening, before falling into bed with the more Bohemianesque character of Ruffalo.  Moore ‘s character suffers a minor mid-life crisis compared to other cinematic meltdowns in her oeuvre. Nonetheless, her kind, natural, earth-mother performance is very enjoyable. Fear not though it would appear in her latest film — David Cronenberg’s Map to the Stars (2014) — finds her back on full neurotic alert as an actress flailing in the age-conscious, superficial Hollywood system.