Last night, just under a week into the stricter UK social distancing procedures, I finally got pangs of withdrawal symptoms from NOT going to the cinema. Of course, my feelings or emotions at this time pale into insignificance when compared to the thousands of people affected by or those who have lost their lives to the COVID-19 virus. Moreover, while one could describe our planet as currently resembling a massive open prison, it’s nothing compared to the horrific conditions of the vertical prison in Spanish horror thriller, The Platform (2019). Be warned: do not watch this film while eating your dinner, as it could affect your appetite.

While I recently wrote an article about some films that could make you feel better in this global crisis (link here), paradoxically a horror film such as The Platform (2019) can also work to make you feel better too. Because a film where prisoners are trapped in a multi-level jail and whose food intake is based on how high they are within the prison, is an ingenious, yet terrifying concept. Knowing my life can never be as bad as the main protagonist and the prisoners he encounters made me feel somewhat relieved. Furthermore, the gore levels, plot twists and social satire on display took my mind off the reality of my own situation.

Ivan Massague, with his hangdog-Zlatan-Ibrahimovic features is Goreng, our reasonable everyman at the start. For some bizarre reason he has volunteered to be in this Kafkaesque hell for reasons I won’t spoil. His first cellmate is an older man, Trimagasi (Zorian Eguileor). He is in for committing manslaughter. Trimagasi explains how the system works in the jail. Food comes down on a platform and is meant to be shared with everyone from top to bottom. Of course, it doesn’t work like that as greed prevails. The lower down you are the less food you get. What happens when you don’t eat? You look for alternative food sources. Goreng is naive initially, while Trimagasi knows how to play this vicious game, especially because they never know what level they will be on month to month. This is no Shawshank Redemption (1994), where the mentor coaches the younger man positively. In this environment it is a dog eat dog world; and it’s every dog for him or herself.

The Platform (2019) has a brilliant script, thus is a wicked delight from start to finish. Even the ambiguous ending, which while leaving our gallant lead protagonist’s fate open to interpretation, is fitting for a constantly surprising genre film. It is both a joy as horror film and social commentary. Indeed, the film has its pound of flesh and eats it. I just have to say there is some fantastic gore and memorably crunching deaths throughout of man, woman and beast. The film doesn’t have all the answers. In fact, it is actually quite nihilistic about human behaviour and our inability to share the wealth around. But as high concept and low budget horror movies go, it’s one of the most entertaining I have seen in sometime. Anything to take one’s mind off what is really happening in this world can only be positive. 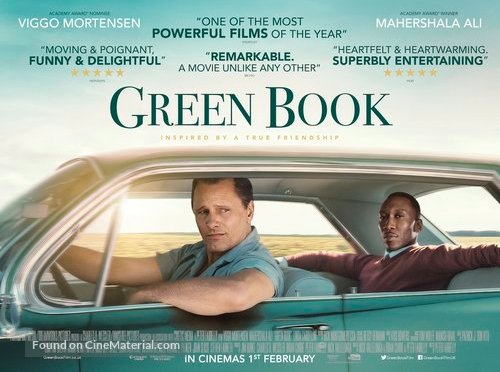 I have to be honest I am getting very tired of racism and racists, so lord knows how the people who it affects deal with it on a day to day basis. To judge and attack people because they have a different race, background or skin colour is, and has always been, the height of stupidity. We are all humans and should be judged on our actions and behaviour and NOT our physical appearance, social background, sexuality or gender. Furthermore, we must not treat someone a certain way based on general experience of how others behave too. I subscribe to individualistic judgement and the desire for peaceful attempts to resolve conflict and differences. Those that attack and bully and abuse any other human being are wrong and their minds must be changed.

If a feel-good film such as Green Book (2018) can at the very least change one person’s negative attitude then it will be a success. It makes very broad points in regard to race relations and while arguably simplistic, in the very fabric of its story remains a heartwarming call for tolerance, understanding and friendship. Directed by Peter Farrelly, Green Book is based on the true story of Dr Don Shirley, a genius musician, and his brave trip across the deep South of America in 1962 with working class Italian driver, Tony “Lip” Vallelonga. Safe to say the road tour is not without its ups and downs and the men, after initial differences, find common ground, loyalty and friendship.

As aforementioned in a previous review I would say Roma (2018) will probably win best film at the Academy Awards. Green Book has a decent chance based on the sheer energy and persuasion of the story. Moreover, it attempts to marry comedy with social drama and on the whole succeeds. Peter Farrelly directs with skilled aplomb and the guy is a past-master of the road movie genre with films such as: Dumb and Dumber (1994), Kingpin (1996), There’s Something About Mary (1998) and Me Myself and Irene (2000), all comedies which adhered to road movie genre tropes. I guess that’s one thing that holds Green Book back and that is it’s very “by-the-numbers”, however, that’s also one of the joys of the story in that it hits the heights of genre expectations so well. Finally, Farrelly marshals the road trip, musical gigs and period setting really impressively and film made me feel all glowy by the end.

Viggo Mortensen is such an intelligent actor and has often been cast in intense roles which require much internal conflict. Here, his Tony Lip, is a larger-than-life Italian tough guy, handy with the bullshit and his fists. He eats like a horse and loves his family. Further, he’s stand-up guy who won’t be dragged into the Mafia underworld no matter how broke he is. The character verges on the Italian stereotype we have seen many times before but Mortensen imbues the lovable rogue with a humanity, humour and a do-the-right-thing spirit throughout. It’s his journey we follow as he moves from prejedicial jerk to something more socially acceptable. Lastly, Mortensen’s scenes with Ali are just brilliantly acted; the two bouncing off each other with wit and perfect timing.

Mahershala Ali should win this. He is absolutely outstanding. While Mortensen’s character is big and splashed across the screen in ebullient effervescence, Don Shirley quietly steals the show. His erudite, intellectual and refined exterior hides a pained and lonely soul who just does not fit in to society anywhere. While his music is loved and his genius revered he just cannot find inner peace. I mean I know nothing about playing the piano but Ali impresses here too with his conveyance of the musicianship of the character. Lastly, Ali’s performance is one of the best of the year, and while he won previously for Moonlight (2016), this performance is so good he should be on the list of leading actor role nominations.

The structure of the screenplay adheres to the classic Hollywood model to a tee. There are few surprises as the set-up of two opposite characters meet and go through a literal and figurative journey of discovery and change. Along with the lead performances, what raises the story though, is a fizzing script full of conflict and comedy. We get set-up-punchline, set-up-drama, set-up punchline, set-up feelgood moment throughout, making it a metronomically impressive piece of writing. The letter-writing running gag, for example, is pure comedic gold. Moreover, the script is littered with tremendous dialogue exchanges between the lead roles and ensemble characters which had me laughing and emoting throughout. Perhaps, historical and political accuracy could be queried by some and there is a reliance on familiar archetypes, but that doesn’t interfere with a zinging story.

Green Book is a film that has its chicken and eats it. It is full of life, food, music, family, friendship while making important points about racial issues. It also raises many laughs with heartwarming poignancy, highlighting the inequalities of 1960s with a broad hand. While these issues are not as intriguingly addressed as in BlacKKKlansman (2018), they elevate the generic road-movie-opposites-buddy-bromance tropes and structure. More than anything this is a story about friendship and while it treads a well worn road, mirroring films such as Planes, Trains and Automobiles (1987) and Midnight Run (1988), it does so with verve, humour and heart.