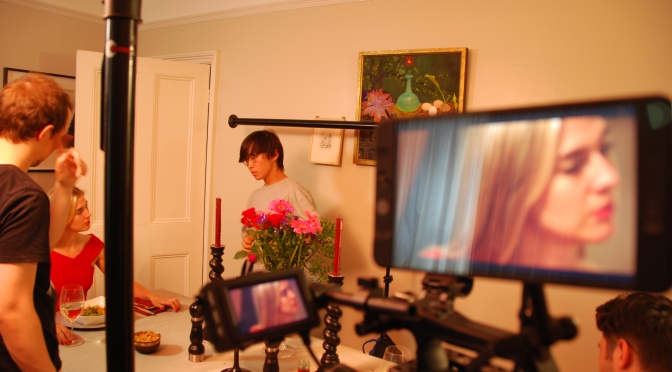 I’ve been busy trying to avoid the booze in the fridge most days, although I did fail miserably on Saturday. But I was kind of celebrating fifteen years of low budget short filmmaking. If you didn’t know my production company is called Fix Films Ltd. Here is my latest showreel video. It’s basically a look back at all the films we have made. Also, it’s a tribute to all of the talented people we have worked with.

Fix Films are a filmmaking collective. Since 2005 they have been involved in the creation of many, many short films and promos. They self-produce, write, direct, edit and score their own films to a very high standard despite the low budgets. They are true independent filmmakers.

This showreel features images, clips and music from most of our major short films productions.

Paul Laight, Gary O’Brien and all the amazing people we have worked with.

Please also check out our other sites:

Last year I wrote and filmed a new short film called You Have a New Follower (2020). It is now completed and it is now being prepared for submission to film festivals. Here are the details, credits and a trailer to watch.

Astrid Nilsson’s life begins to unravel when she is stalked by a mysterious hooded figure.

You Have a New Follower (2020) is the latest short film from Paul Laight and Fix Films. It was shot in London and combines mystery, suspense and science fiction genres with dramatic effect. It’s a short, low-budget film which seeks to explore themes of paranoia, anxiety, and identity within the thriller genre.

Firstly, the evacuation of Dunkirk, France, during World War II was simply put one of the most incredible acts of survival and escape achieved. From the historical articles and documentaries I have read and seen the Allies were on the ropes and pinned back by the German army causing 400,000 beaten, starving and bedraggled human beings to be trapped on the beach waiting desperately for rescue.  It’s no spoiler to state that many brave people enabled that rescue creating that well-known phrase “Dunkirk spirit” to enter our vocabulary.

Put yourself in that position for even just a minute and the fear drains one cold and feeling so lucky that I will never have to feel that threatened. These are people, young soldiers fighting against a fascistic foe who are backed into a corner and whose lives are about to be extinguished. So, think about that when you wake up in the morning because Christopher Nolan’s epic film, as do many other films, books and television shows about the war, give your life meaning about how lucky we are to not have to live through that. Count your blessings you’re not in a war and the life we live has relative freedom.

These and many more emotions flashed through my being while experiencing the incredible epic that master director Nolan and team have delivered via Dunkirk. Throwing us immediately into the action we are shown the hell of war from three perspectives: land, sea and air. Nolan works from a simpler focus and premise compared to his other works and this makes it all the more powerful an experience. Where films such as Inception (2010), Interstellar (2014) and Memento (2000) had complex, shifting narratives relying on heavy exposition, grand concepts and plot twists, Dunkirk deals with one simple sterling idea: survival!

I found the whole experience immersive and pulsating from a cinematic perspective. Christopher Nolan, and his production team, have in the: editing, cinematography, composition, colour, acting, framing, sound, score and movement created pure and poetic cinema. From the safety of my comfy seat I felt real danger, peril and claustrophobia. The narratives’ drive comes from fragmented moments of fear and blasts of explosive danger. The impressionistic style was full of scenes containing quiet doom as well as noisy, confusing and fiery terror. Even the smallest situation such as the locking of a cabin door takes on great significance, sending a chill down the spine. As the enemy closes in from above and below and water fills the screen and lungs of our heroes, then death moves in for the kill.

Nolan eschews the solid build-up of traditional characterisation to create emotion through the visual form with a chopping style which serves to heighten the panic. There are so many haunting images as men and boys are stuck behind doors and ships and in boats and underwater and in the air and on moles and piers, compressed, suffocating and unable to breath as bullets, torpedoes and bombs pepper their souls. The coruscating soundscape, montage and hypnotic score from Hans Zimmer only add to the dread within the non-stop action. The dialogue is spare and at times muffled as character development is also sacrificed due to the compressed timeline. Yet, for me, empathy was garnered through verisimilitude, form and style rather than a conventional storytelling and a simplistic three-act transformational arc.

The characters are archetypes but serve the story very well. Kenneth Branagh’s noble sea Commander brings gravitas while Mark Rylance brings a naturalistic humility to the stalwart and duty bound Mr Dawson. Aneurin Barnard’s silent soldier allows his haunting eyes to dominate, while the pathos emitting from Barry Keoghan’s young George is incredibly powerful. Fionn Whitehead and Harry Styles, while inexperienced actors, represent the palpable fear any young man would exhibit when faced with certain death. Tom Hardy adds star quality in his role of RAF pilot, Farrier, and the image at the end of his plane burning in the sunset is indelibly etched in my mind.

But, overall the film belongs to the masterful direction of Christopher Nolan who, in delivering 106 minutes of pure dramatic exhilaration demonstrates he is more than just a genre filmmaker but a cinematic artist echoing the works of Sergei Eisenstein, Martin Scorsese and Stanley Kubrick within this war and disaster film masterpiece. Dunkirk was a savage defeat for the Allies but it rallied the nation against the enemy and Nolan has produced a film that stands as a worthy tribute to those who lost their lives and those brave people who survived.